Sunday, May 20:  I don’t have any pets in Oman, but back home in Virginia, we have a Border Collie named Bailey. He’s smart and lovable and, nowadays, he’s getting to be quite the old man… 😦  Here are some photos of Bailey. 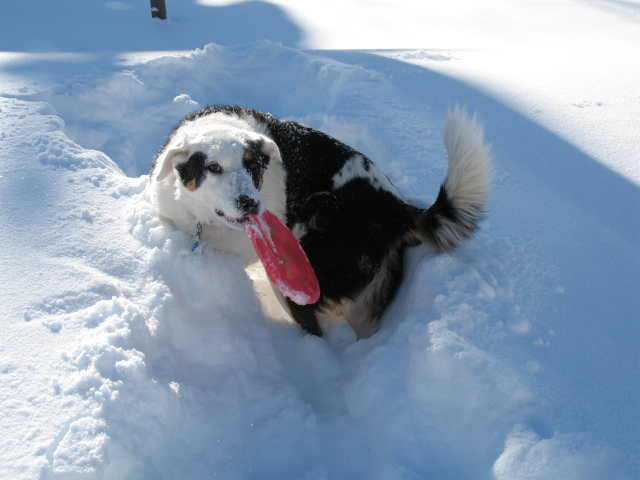 Bailey and his Frisbee during the blizzard of 2010

Here’s Jake’s explanation of our challenge: A pet is a household animal kept for companionship and a person’s enjoyment, as opposed to wild animals or to livestock, laboratory animals, working animals or sport animals, which are kept for economic or productive reasons. The most popular pets are noted for their loyal or playful characteristics, for their attractive appearance, and/or for their song.

Pets also generally seem to provide their owners with non-trivial health benefits; keeping pets has been shown to help relieve stress to those who like having animals around. There is now a medically approved class of “therapy animals,” mostly dogs, that are brought to visit confined humans. Walking a dog can provide both the owner and the dog with exercise, fresh air, and social interaction.

The most popular pets are dogs and cats, but there are also rodent pets, such as gerbils, hamsters,chinchillas, fancy rats, and guinea pigs; avian pets, such as canaries, parakeets, and parrots; reptile pets, such as turtles, lizards and snakes; and aquatic pets, such as tropical fish and frogs.