Friday, July 20:  Ailsa of Where’s my backpack? has challenged us with another travel theme for this week: food.

I have to say that some of my favorite foods in all the places I’ve traveled were in Cambodia and Vietnam.  Dishes there were healthy, artfully prepared and delicious.

While we have been cruising in the tuk tuk around Phnom Penh, I see a riverside restaurant that reminds me fondly of the Grand Cafe on the Nile in Ma’adi, a suburb of Cairo.  I tell Mr. Lo I want to go to this cafe for lunch and since the Royal Palace doesn’t open till 2:00, he drops me off here.  I have about an hour and a half, so I order a Tiger beer, which they serve with miniature peanuts with the skin still on them, smothered in salt.  The surrounding tropical plants whisper in the breeze.  I hear the buzz of construction activity on the river, the roaring engines of cranes moving the mud in the river, the clanking of an anchor on a riverboat.  In the restaurant, I hear the nasal sounds of Asians talking, the whining Khmer music.

My meal of fresh steamed fish in lime juice arrives, artfully prepared, with three banana leaf cups full of peppers and sauces.  Later, as I write in my journal and watch the people and the activity on the river, I have a glass of red wine.  It’s quite lovely and relaxing, although the roaring cranes on the river ruin the ambiance a bit.  The Grand Cafe on the Nile it’s not, but it’s pleasant all the same.  I’m alone here after my first four days in Hanoi, where I was surrounded by people, but so far, I enjoy the solitude.   I’m feeling a little buzz because of the beer and the wine, but it’s a relaxing wait for Mr. Lo to return for me.

And the food prepared on a junk in Halong Bay, Vietnam, was indescribable.  Here’s another excerpt from my post: junkin’ it on halong bay: the happiness cruise.

Another extravaganza at dinner.  Thanh again reads the menu aloud and tells us to get our cameras out as we will have much to see.  Ruth and I prepare to enjoy by ordering a bottle of red wine.  First, we’re served another fresh vegetable salad, covered delicately in some kind of spring-fresh sauce, cilantro abounding.  Then out come the spring rolls, accompanied by two herons carved out of turnips. 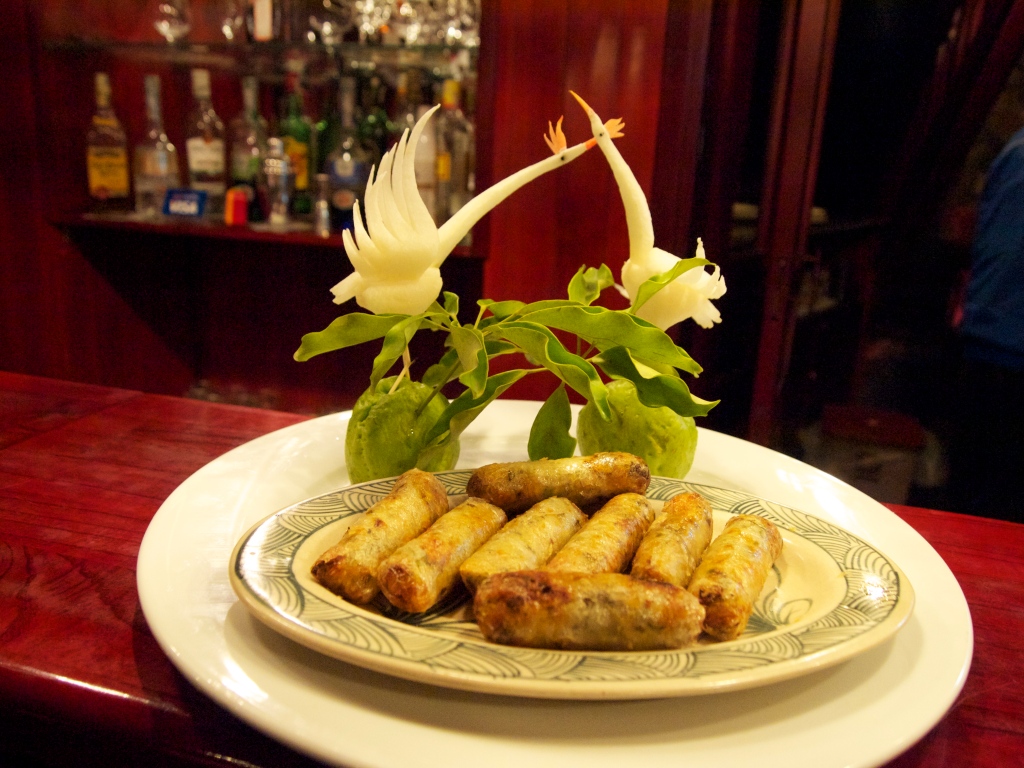 Prawns in a delicious sauce decorated by a dragon carved out of a pumpkin. 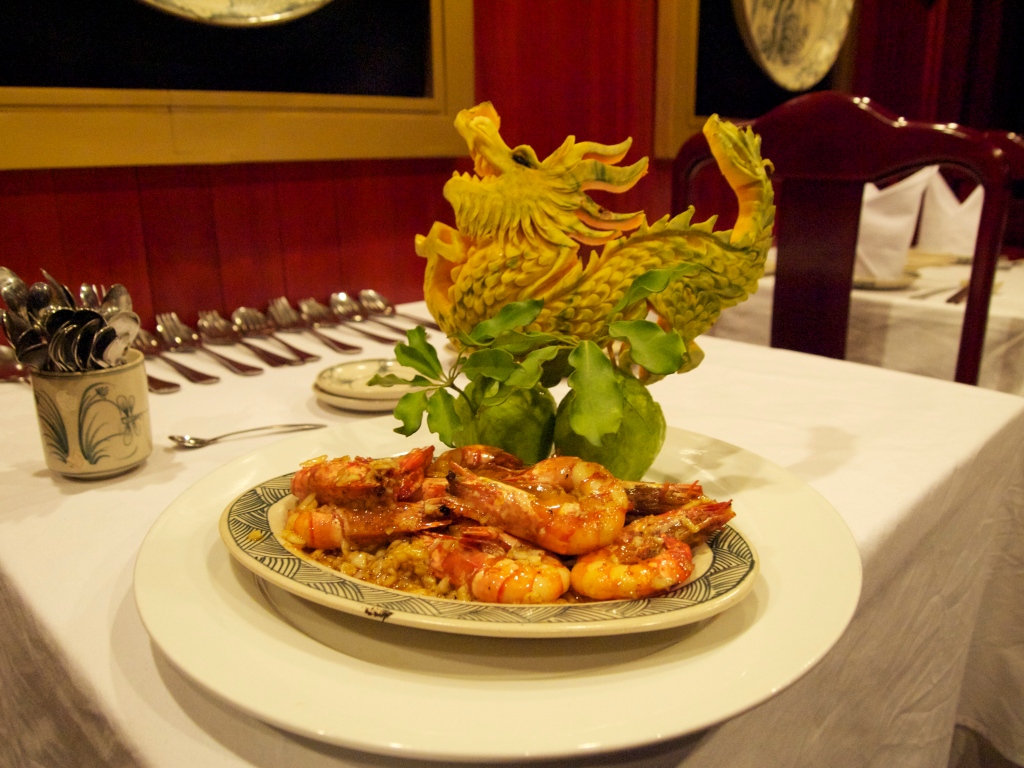 prawns with a pumpkin dragon

Crayfish, very messy to peel, but delectable.  Chicken, mackerel, rice, and more tropical fruits.  And the grand finale carving: a sailing junk carved from a watermelon.  Apparently, the chef spent three hours of his day carving these showpieces.

the chef and his sailing ship